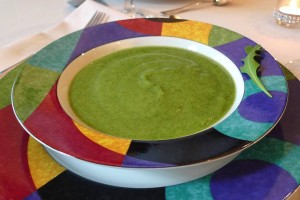 This week marks our 15th wedding anniversary, and since it’s a big year, we wanted to celebrate in a big way! We had an extravagant British-themed dinner that took me several days to complete, but it was a fun project that was well worth the effort. I wanted to tie this anniversary back to our engagement anniversary/Valentine’s Day celebration when we enjoyed a Downton Abbey themed dinner. Given that the traditional gift for the 15th wedding anniversary is crystal, I thought another classic British meal with all the trimmings would also give us a great excuse to get out the crystal pieces we were given as wedding gifts but don’t use as often as we could. This crystal-studded celebration dinner was my anniversary gift to my hubby. 🙂

We started with a simple summery soup called rocket and courgette soup in the UK, but here in the States, we would call it arugula and zucchini soup. 🙂 I based the dish on a recipe from BBC Good Food, and then added a couple touches of my own. 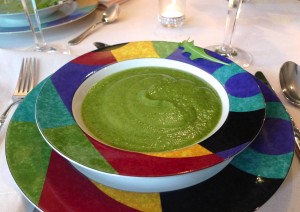 Preheat a large sauté pan. Add oil. When the oil is hot and shimmering, add the onion and potato. Cook until the vegetables are softened. Add the garlic, and cook until fragrant, about 30 seconds. Then add the courgettes and stock. Scrape the bottom of the pan to release the brown bits. Bring to a boil. Cook until the courgettes are tender. Next, add the rocket, and cook until wilted, about 30 seconds. In small batches, blend the soup in a blender until smooth. Season to taste with salt and pepper. Serve warm. 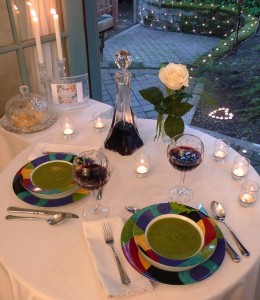