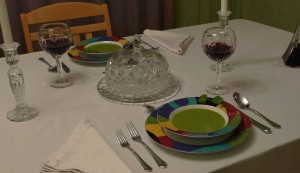 My hubby and I enjoyed another themed dinner at home for Valentine’s Day, which is the way we like to celebrate this holiday every year. 🙂 We love to try new things together in the kitchen, and we have had a lot of fun over the years making new and different recipes – Most recently, for Valentine’s Day two years ago we made two kinds of ravioli (beet and lobster), and last year we made sushi with miso soup. This year we decided to try a Downton Abbey theme! I made three vintage British dishes the characters might have enjoyed at one of their elaborate dinner parties on the show.

I learned that for a grand dinner, there could be as many as nine courses. Since I was playing the part of both Mrs. Patmore while cooking the dinner, and Lady Grantham while enjoying the dinner, I limited our meal to three courses. 😉 Our first course was a cream of watercress soup based on a recipe I found in A Year in the Life of Downton Abbey: Seasonal Celebrations, Traditions, and Recipes. I replaced the butter with safflower oil, and replaced the cream with 2% milk, but otherwise followed the recipe rather closely. I ended up using three bunches of watercress. Remember to save a few sprigs to garnish the plate. 🙂 Also, this can be made a day or two ahead of time, which is always a plus. 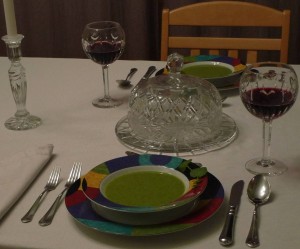 Heat the oil in a heavy-based saucepan, then add the onion, leek and potato and stir to coat them in the oil. Season with salt and pepper and let the vegetables sweat with the lid on over a low heat for about 10 minutes, stirring occasionally. When the vegetables are tender, add the hot stock. Bring back to the boil, then add the watercress and cook for a further 5 minutes. Season with salt, pepper and nutmeg. Take the pan off the heat and liquidise the soup. Stir in the milk and pour into bowls to serve. 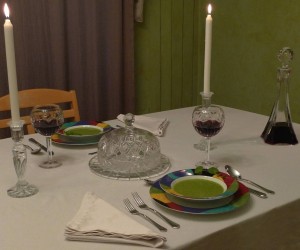 We paired our dinner with the perfect wine: Downton Abbey Bordeaux Claret 2012. I learned that great English houses of the Downton era enjoyed many French wines and foods, so this was similar to the wine the characters on the show may have paired with their fine meals.

Stay tuned for episode 2 of our Downton Abbey dinner – The main course! 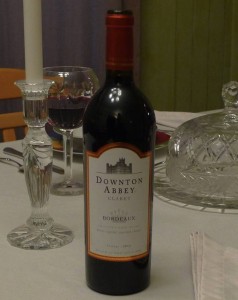