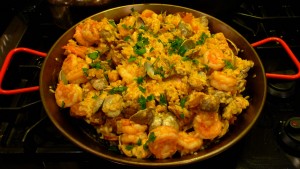 Almost every New Year’s Eve, we get together with some dear friends of ours and ring in the new year together. We usually pick a theme for our evening. This year we chose to try some Spanish dishes. They made a delicious mushroom tapas-style dish and flan for dessert (and also made sure we had some Spanish wine to pair with our meal!) We brought paella with chicken, clams and shrimp to the party. It’s a recipe I’d like to keep in my arsenal, since it was fairly easy and delicious! It has a little something for everyone.

I substituted the chicken thighs with boneless and skinless chicken breasts. I also used only half of the sausage that the recipe called for, but double the seafood. I used the gas stovetop at our friends’ house instead of the grill, as well, since it was chilly and rainy outside! 😉 Other than that, I followed the recipe fairly closely.

Based on a recipe from Chow

1 to 2 tablespoons olive oil, as needed

1 teaspoon kosher salt, plus more for seasoning the shrimp and chicken

Core and halve the tomatoes. Grate the flesh side of each half on the large holes of a box grater set over a medium bowl, stopping when you get to the skin. Discard the skins. You should have about 3/4 cup of tomato pulp and juice; set aside.

Place the shrimp in a medium bowl, add 3/4 teaspoon of the paprika, and season with salt and pepper. Toss to combine and refrigerate.

Place the chicken in a medium bowl and season generously with salt and pepper; set aside.

Heat stovetop on high heat. Place a 15-inch paella pan on the stovetop, and heat until hot, about 2 minutes. Add the chorizo to the pan, and cook, stirring occasionally, until the sausage is starting to brown and the fat is rendered, about 2 to 3 minutes. Using tongs or a slotted spoon, transfer the chorizo to a large bowl; set aside.

There should be a thin layer of rendered fat in the pan. If there’s not enough, add 1 to 2 tablespoons of olive oil. Add the seasoned chicken to the pan in a single layer, and sear, stirring occasionally, until both sides of the chicken pieces are golden brown, about 6 minutes total. Using tongs or a slotted spoon, transfer the chicken to the bowl with the chorizo; set aside.

Add the onion to the pan, season with salt and pepper, and cook, stirring occasionally, until softened, about 5 minutes, adjusting the heat as needed so that the onions don’t burn. Add the garlic, remaining paprika, and saffron, stir to combine, and cook until fragrant, about 30 seconds.

Add the reserved tomato pulp and juice and cook until the mixture has slightly darkened in color, scraping up any browned bits from the bottom of the pan, about 3 minutes. Add the rice and measured salt and stir to coat in the tomato mixture.

Add the broth and stir to combine. Arrange the rice mixture in an even layer. Distribute the reserved chorizo and chicken over the rice, adding any accumulated juices from the bowl. (Do not stir the rice from this point on.)

Bring the mixture to a lively simmer. Continue to simmer, checking occasionally, until the rice grains have swelled, most of the liquid has been absorbed, about 12 minutes.

Arrange the reserved shrimp and the shellfish (hinge-side down) in the rice, nestling them slightly. Cook until the shellfish have opened, the shrimp are just cooked through, and the rice is tender but still al dente, about 10 to 12 minutes.

Before serving the paella, discard any unopened shellfish and sprinkle the dish with the parsley. Serve with the lemon wedges.