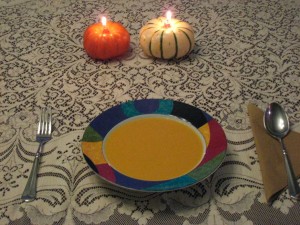 Happy Sweetest Day! This is one of those little holidays that gives us an excuse for a little celebration. I am all for that :). I decided to make a special dinner menu to mark the occasion. The recipes were from a really good book I read this year called A Homemade Life: Stories and Recipes from My Kitchen Table. It was written by an author who lives here in Seattle, Molly Wizenberg, who has a well-respected recipe blog called Orangette. I read the book in the spring and have been saving these two autumn recipes until now. They are a little gourmet, a little decadent, and very delicious. Perfect for a fall evening that feels a little special.

The first recipe I made was a butternut squash soup with pear, cider, and vanilla bean. It’s a very funky combination, I know, which is why I had to try it! It just sounded so unique and special with the vanilla. Both Rob and I agreed it was a very nice and refreshing flavor combination. I would highly recommend it! I lightened the recipe a touch by using less half and half, and replacing the other portion with skim milk. It was still very creamy and silky because of the squash, so we didn’t miss the extra richness at all. I also only needed 1 tablespoon of olive oil instead of 3. Other than those two little details I followed the recipe, so I am just passing it along in all of its goodness :).

Add the oil, squash, pears and onion to a large pot over medium low heat, and cook uncovered for about 10-15 minutes, stirring occasionally, until the onion is translucent and the pears are soft. Add the cider and bring it to a boil over medium high heat. Add the broth, lower the heat to medium low, and simmer partially covered for about 30 minutes until everything is tender.

Carefully puree the mixture in small batches in a blender. Return the soup to the pot and continue to cook over medium low heat, uncovered, until it has reduced to a thick and creamy consistency that you like. While the soup is bubbling, put the half-and-half and milk in a small saucepan. Cut the vanilla bean in half lengthwise and scrape the seeds with the back of a knife. Put the pod and seeds in the dairy and put the pan over low heat until it is just steaming, but not boiling. Strain the vanilla pod from the mix and set aside. When your soup has reduced to the thickness you desire, stir in the vanilla mixture. Season with salt to taste and enjoy!

The main course was a cider glazed salmon dish. It was so simple, but so delicious. Isn’t that the way with the best recipes? 🙂 I used half and half instead of all cream, but other than that detail I followed the recipe. I usually don’t use cream or butter, but because you only need a little bit of this glaze to make an impact, I didn’t skimp. I think a little bit is just fine :).

1 medium shallot, cut in half and peeled

2, 3 or 4 salmon fillets (depending on the number of portions)

½ cup half and half

In a large skillet bring the shallot, butter and cider to a simmer over medium high heat.

Place the salmon in the cider blend, cover and simmer gently. Flip half way through. For every inch of thickness the salmon needs about 10 minutes to cook until it is just cooked through.

Remove the fish from the pan and cover with tin foil.

For the glaze, raise the heat under the pan to medium high, add a pinch of salt and simmer until the liquid is reduced by about 2/3. It will be a slightly thickened. Reduce the heat to medium and add the half and half. Bring to a boil, stirring frequently, until the mixture darkens to a light caramel color.

Plate the salmon and top with a spoonful of the glaze.

Rob also treated me to special little chocolate pumpkin truffles for dessert. One of my favorite local chocolatiers called Moonstruck Chocolate makes creative little pieces to go with the seasons. Almost too cute to eat….Almost :).

We had a new wine tonight from Columbia Winery called Romance Red. Since Rob and I had our wedding reception at that winery, it seemed like a good choice for a romantic evening celebration :).