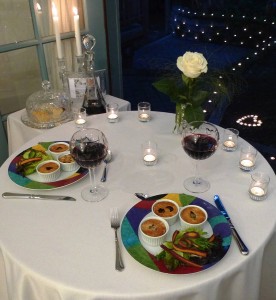 The final pie I made for our British anniversary pie extravaganza was a pheasant, leek, and parsley pie. 🙂 I started with a chicken pie recipe from BBC Good Food, which I thought would lend itself well to the gamier pheasant. I loved the clean, fresh flavors of the leek, parsley and lemon zest that complimented the pheasant well.

Again, I did a slow braise with the pheasant, just as I did with the rabbit, which resulted in very tender meat and a bunch of extra pheasant stock to use for future recipes.

Cooking the pheasant and the stock:

Preheat oven to 220 degrees. Preheat a large stockpot on medium high heat. When hot, add oil, and wait until the oil is hot and shimmering. Add the whole pheasant, and brown on all sides. Add the remaining ingredients and cover everything with water. Bring to a boil. Once the water is boiling, cover the pot and place it in the oven. Cook for about 2 hours, or until the pheasant meat is easily shredded with a fork.

Strain the stock, and discard the vegetables and seasonings.

Preheat a large sauté pan over medium high heat. When hot, add the oil, and wait until hot and shimmering. Add the leeks, and cook until softened. Add the flour, stir well, and cook for about a minute. Gradually stir in the stock and wine, cooking until the sauce is thickened slightly. Add the pheasant meat, and heat until warmed through. Take the pan off the heat, and add the lemon zest and parsley. Season to taste with salt and pepper.

To serve, add the stew to small ramekins and top with the pre-baked shortcrust pastry. (The instructions for the pastry can be found here in the first beef pie blog entry.)

The sweet ending to our meal is up next. 🙂 A lemon syllabub trifle!