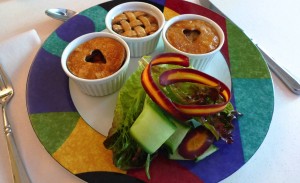 I decided to make a meat pie for the main course of our British anniversary dinner. There are so many to choose from, however! I couldn’t make up my mind…So I made 3! 🙂 I made these all ahead of time and froze them until we were ready. Now we have lots of leftovers to thaw whenever we want a special meal.

I used the same shortcrust pastry for all three pies. The recipe I used came from the BBC recipe website. I replaced the plain flour with ivory whole-wheat flour, and I ended up using a little more water than the recipe called for to properly moisten the whole grain flour. I ended up using 5 tablespoons, but add just enough for the crust to come together. This crust also freezes well for future use. I served my pies in little ramekins and just topped them with crust. Not only was it a cute presentation, but also I only needed a small amount of the rich pastry for each pie. To make the little interchangeable and removable crusts like I did, line a sheet pan with parchment paper. On a lightly floured surface, roll out the refrigerated crust to about 1/8 inch thick, and cut it into the shapes you want with cookie cutters. Brush the pieces with an egg wash and bake at 350 for about 15-18 minutes, or until golden, turning halfway through for even cooking.

The first pie I made was a beef, ale, and mushroom pie. I used a round roast, which is a fairly lean cut that braises well. I also used Canadian bacon rather than traditional bacon, and omitted the sugar completely. I replaced the chestnut mushrooms with criminis, since they are easier for me to find in the States. I also made several tweaks to the recipe for my American kitchen, converting grams to ounces and changing the temperature from Celsius to Fahrenheit.

10 ounces dark ale, such as Guinness

Cover the porcini mushrooms in the boiling water for about 20 minutes, or until they are tender. Then remove the mushrooms, squeeze out the excess moisture, and reserve the liquid.

Preheat oven to 320 degrees. Using a large pot with a lid and a heavy bottom, preheat on medium high heat. When it is hot, add some of the oil to coat the bottom, and wait until the oil is hot and shimmering. Add the beef in small batches, and brown on all sides. Set aside. Add the onion and carrots, and cook until caramelized and softened. Add the soaked mushrooms, and cook for about a minute more. Add the flour, stirring until it turns slightly golden. Place the meat and any juices back into the pan and stir well. Add the ale, stock, and porcini soaking liquid. Stir well to fully incorporate the flour into the liquid. Season the stew with salt and pepper to taste. Add the herbs. Bring the stew to a simmer. Cover the pot with a lid and place it in the oven for about 2 hours, or until the meat is tender enough to shred with a fork.

Meanwhile, preheat a sauté pan over medium high heat. Add a little more oil. Add the Canadian bacon, and cook until caramelized. Then add the crimini mushrooms and cook until they release most of their moisture. Remove from the heat. When the stew is cooked, stir the bacon and mushrooms into the stew.

To serve, add the stew to small ramekins and top with the pre-baked shortcrust pastry. 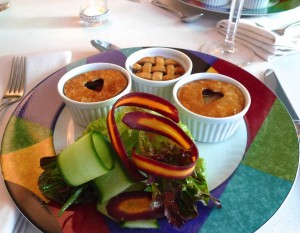