It’s that time of year again for all things Halloween!

For my first treat of the season, I made Irish Halloween bread called Barmbrack. Since the holiday began with an ancient Celtic festival, I thought this bread would be a nice way to celebrate the history of Halloween.

I also love the tradition that goes along with this bread. In the past, different objects were baked into the loaf, such as a ring or a coin. The ring meant that the person who received it would be married within the year, and the coin meant riches. There were also items baked into the bread that were said to signify bad luck. For instance, a piece of cloth meant poverty, and a thimble meant you would never marry. These customs have mostly gone by the wayside, and I didn’t bake any objects into my cake since I didn’t want to chance an unexpected visit to the dentist. 😉 But I still love the tradition!

Based on a recipe from The New York Times

In a medium bowl, combine the tea, currants, and raisins. Let sit for about 2 hours, or until the fruit plumps up with the tea. Strain, but reserve the extra liquid.

In a liquid measuring cup, combine the milk and the yeast. Let sit for about 10 minutes, or until the mixture looks frothy. Add the beaten egg and 1/3 cup of the strained tea to the milk mixture.

In the bowl of a stand mixer fitted with a dough hook, add the flour, spices, and salt. Mix the dry ingredients. Then add 2 tablespoons of butter and beat until it is combined into the flour mixture. Add the milk mixture, and beat until the dough forms a large ball. Add the fruit and zests. Beat until well combined, about 5 minutes. The dough will be very sticky.

Transfer the dough to the prepared loaf pan, and spread until it is an even layer across the bottom of the pan. Cover with a kitchen towel. Let the dough rise in a warm place for about 1 1/2 hours, or until doubled in size.

Check to make sure your oven rack is in the center. Preheat oven to 350 F. Bake the loaf for about 48 minutes. When it is done, the top should be brown, and the bottom should sound hollow when tapped with your finger.

Allow the loaf to completely cool on a wire rack before cutting with a serrated knife. 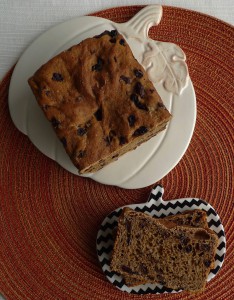