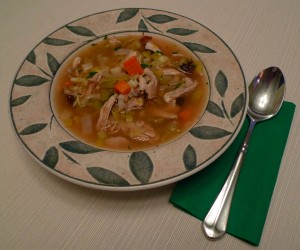 I read a page turning novel this winter called The Winter Sea by Susanna Kearsley. It is set in Scotland, and follows two interconnected story lines….One in the 1700s and one in the present day. I felt like I took a little trip to Scotland while learning a lot about their history. Much of the story revolves around Slains Castle, which looks to be an absolutely breathtaking place. That is now on my list of places I’d like to visit!

In the meantime, as I dream of that vacation, I cooked a Scottish dish at home for a little international culinary adventure today :). When I’m inspired by a place and a culture, I start researching their food. I discovered a Scottish soup called Cock-a-Leekie that looked intriguing, and I loved the name! It dates back farther than the 1700s, (a recipe for it was first published in 1598 according to Wikipedia), so the characters in the book might have enjoyed a steaming bowl at the dinner table of the castle. A perfect dish for a cold winter night, no matter the century or the continent :).

Heat a 6-quart Dutch oven on medium-high until hot. Add thighs; cook until browned, turning once, about 8 minutes. Transfer to a bowl. Repeat with breasts.

Add broth, wine, celery, carrot, and garlic to Dutch oven. Bring to a boil; scrape any browned bits from pot; return chicken to pot, reduce heat, and simmer, skimming as necessary, for 1 hour. Transfer chicken to a plate; let cool. Transfer vegetables to another plate; reserve.

Add leeks, prunes, and barley to broth. Bring to a boil, reduce heat, and simmer until thick, about 40 minutes more. Once chicken has cooled, shred meat. Finely dice carrot and celery. Stir chicken, carrot, celery, and parsley into soup, heat through, season to taste and serve. 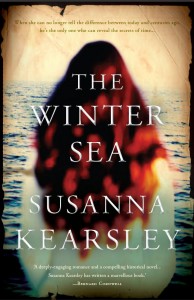