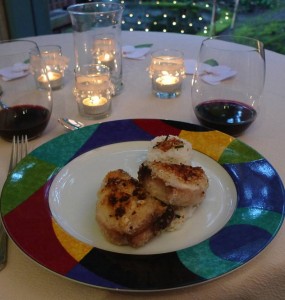 The main course of our anniversary dinner was another recipe inspired by Roy’s Fish and Seafood: Recipes from the Pacific Rim. We had a macadamia nut and panko crusted ono fish, otherwise known as wahoo. (Wahoo! Sorry, couldn’t resist. 😉 ) It’s a Hawaiian fish with a dense but flaky texture, and a mild flavor. We also had a side dish of rice to accompany the fish. The cookbook calls this recipe Happy Rice. 🙂 So all in all, I’d say this is one of the happiest dishes I have ever made. 😉 Wahoo and Happy Rice!

We are lucky enough to have a Hawaiian fishmonger around Seattle called Tim’s Seafood in Kirkland. In addition to a wide selection of Northwest fish, he also gets fresh Hawaiian seafood. I had my choice of some beautiful fish for our dinner! He even makes his own poke.

I used coconut oil on the fish, and it gave it a subtle coconut flavor that was a nice compliment to the macadamia nuts. The original recipe used quite a bit of butter, but the coconut oil was a really nice alternative. This crust would work well with any firm white fish I think. The original recipe was for opakapaka, which I couldn’t find at the fish store that day, so I think any mild fish with a fairly firm texture would be lovely.

Based on a recipe from Roy’s Fish and Seafood

Serves 2, with leftover rice for later

1 tablespoon furikake, plus more for top

Put the rice in a fine mesh strainer and rinse under cold running water, until the water runs clear. Drain the rice and transfer to a bowl. Cover with fresh cold water, and let soak for 1 hour.

To cook the rice on the stovetop, place the drained rice in a saucepan and add 1 cup fresh water. Bring to boil, decrease heat, cover, and cook until the rice is soft and sticky and the water has just evaporated, about 15 minutes.

Combine the rice with ginger and furikake. Use small cookie cutters to form rice into compact shapes. Alternatively, dip your fingers in a bowl of slightly salted water to prevent the rice from sticking and mold 1 to 2 tablespoons of rice into triangles, cubes, or balls. Set aside and keep warm. Sprinkle the tops with more furikake.

In a food processor, pulse the nuts until they are cut into course pieces. Add the panko and oil, and pulse it all together until it is a thick paste, but still has some texture.

Coat one side of the ono with the paste. Preheat an oven-safe sauté pan over medium high heat, and when hot, place the ono in the pan, paste side down. Cook until golden, and then flip. Finish the fish in the oven. Cook until flaky, about 7 to 10 minutes.

Stay tuned for our Hawaiian dessert in the next entry!