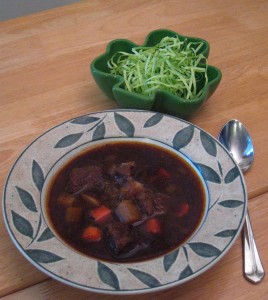 Since Saint Patrick’s Day is fast approaching, I was in the mood for something a little Irish. To celebrate, I made Guinness and Beef Stew tonight. It’s one of those dishes that simmers on the stove all afternoon and makes the whole house smell inviting until the beef falls apart with a spoon. My Irish hubby said it’s one of the best stews he has ever had. I hope you’ll give it a try!

I followed the recipe from Cooking Light pretty closely, since it was already a fairly healthy dish. The biggest adjustment I made was replacing the chuck roast with a round roast of beef, since it is a little leaner cut of meat that also braises beautifully. I also omitted the raisins, simply because I don’t like raisins in most dishes. I found that I didn’t need the full amount of salt, either. Just taste as you go.

2 pounds boneless round roast, trimmed and cut into 1-inch cubes

Heat 1 1/2 tablespoons oil in a Dutch oven over medium-high heat. Place flour in a shallow dish. Sprinkle beef with salt; dredge beef in flour. Add half of beef to pan; cook 5 minutes, turning to brown on all sides. Remove beef from pan with a slotted spoon. Repeat procedure with remaining 1 1/2 tablespoons oil and beef.