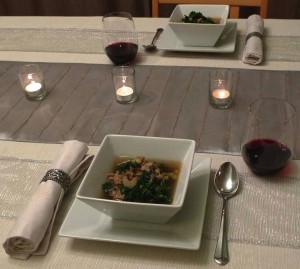 One of our first meals this year had not only one, but two lucky ingredients to eat in the New Year! Lentils and kale. If I had used pork sausage, it would have been three, but the healthier option won out, and I chose chicken sausage. This is a hearty and delicious soup for a cold winter night. 🙂 Perfect for the New Year!

Based on a recipe from MarthaStewart.com

In a large Dutch oven or heavy pot, heat oil over medium-high. Add sausage and cook, breaking up meat with a wooden spoon, until golden brown, about 5 minutes. Add celery and onion and cook until softened, about 5 minutes. Add lentils, broth, and 1/2 cup water and bring to a boil. Reduce to a rapid simmer, partially cover, and cook until lentils and vegetables are tender, 25 minutes. 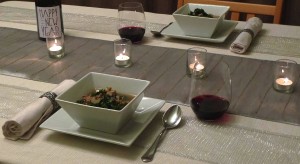