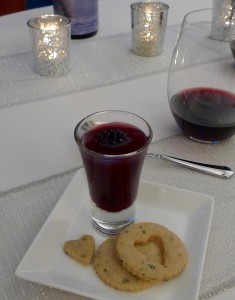 After the main course of duck breast with a farmers’ market plum sauce, the grand finale of our anniversary dinner was a duo of desserts. (Since this anniversary was our sweet sixteen, I thought two desserts were in order! 😉 ) I made blackberry cabernet gelée accompanied by lemon verbena shortbread cookies. (The cookie recipe will follow in my next post.)

I have enjoyed making several gelatin desserts this summer, and I thought this blackberry and cabernet gelée was an elegant way to close the season. I also loved that they could be made a day in advance, so I wasn’t in the kitchen all day on our anniversary.

Based on a recipe from Martha Stewart

1 cup Cabernet Sauvignon (I used one from 14 Hands Winery)

In a medium bowl, add the apple juice and water. Sprinkle the gelatin over the top of the liquids. Let stand about 5 minutes, or until the gelatin has bloomed.

In a medium saucepan, add the wine and the sugar. Bring to a boil and let the sugar dissolve.

Once the sugar has dissolved, pour the wine mixture into the apple juice mixture. Whisk to combine.

Transfer the mixture to a vessel with a spout. Fill the serving glasses. Refrigerate until the gelatin has set. I let mine chill overnight.