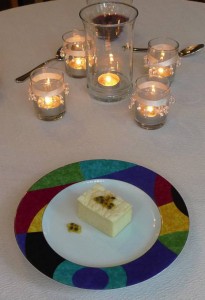 The grand finale of our wedding anniversary dinner celebration was a Japanese-style coconut cheesecake. It was light and fluffy, almost soufflé-like, compared to a typical American cheesecake. The coconut flavor was very subtle, but I served it with passion fruit (called lilikoi in Hawaii) for an added tropical taste. 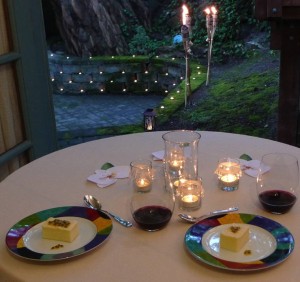 This recipe was from a website called Cooking Hawaiian Style. I omitted the butter completely, and I used reduced fat cream cheese, but otherwise followed the recipe pretty closely.

Based on a recipe from Cooking Hawaiian Style

Note: Do not substitute homemade cake flour (regular flour mixed with cornstarch) for this recipe. Use a store-bought cake flour.

1. Melt cream cheese and coconut milk in a heat-proof bowl over a pot of simmering water. Stir occasionally to break up cream cheese and combine the ingredients. Remove bowl from heat and allow to cool. Mixture will be thick. If lumpy, use a whisk to vigorously beat the mixture until smooth. Set aside.

2. When mixture has cooled, fold in the egg yolks, flour and corn starch. Fold until thoroughly incorporated.

4. In a large bowl, whisk egg whites with an electric mixer until foamy. Add the cream of tartar and mix again, gradually adding the extra-fine sugar a little at a time until soft peaks form. Note: Soft peaks: mixture should be white and opaque, and meringue will fall onto itself when the beaters are lifted from the bowl.

5. Add the cheese mixture to the egg white mixture and fold together until well incorporated.

6. Pour into an 8-inch round spring-form pan that has been lightly greased and lined (sides and bottom) with parchment paper. Place a piece of aluminum foil over the top of the cake so it does not brown.

7. Bake in a water bath for 1 hour 10 minutes. When timer sounds, bake for an additional 10-15 minutes with the oven door cracked.

8. Carefully remove pan from water bath and let stand until cake pulls away from the sides of the pan. Remove spring-form ring and serve. 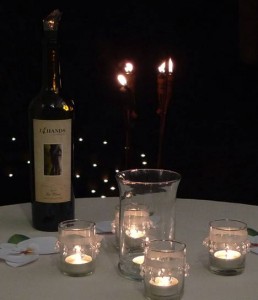 We also paired our meal with a bottle of 14 Hands Winery Reserve Red Blend. We discovered 14 Hands around the 14th anniversary of our first date, so it seemed fitting to close the loop by having a bottle to celebrate our 14th wedding anniversary! 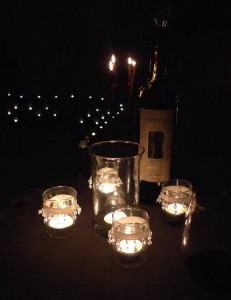