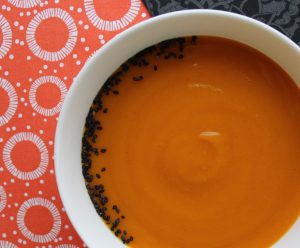 I have been on a Korean food adventure all year! Ever since I visited a Korean restaurant that piqued my interest in the cuisine, I have tried all sorts of recipes, both traditional and new. Earlier this year I made spicy shrimp and winter squash canapés on sesame crackers that were inspired by my Korean culinary adventure. This soup is another new recipe that was inspired by a traditional soup I recently cooked called hobakjuk. The classic soup recipe is made with kabocha, which is a beautiful squash. If you haven’t tried it before, it is a bit starchier than butternut squash or pumpkin and wonderfully sweet. The traditional soup is sweetened further with a little sugar, and it is garnished with delightful little rice balls. I wanted to add a spicy kick to the soup, and I didn’t want to add extra sugar or rice flour, so I put together this super simple recipe for autumn. I hope you enjoy!

Gochujang, to taste (I used 2 tablespoons for a good amount of spice)

In a steamer over high heat, steam squash until very tender when poked with a fork. Remove the squash from the heat. When it is cool enough to handle, remove the skin and cut the flesh into rough chunks.

In the bowl of a food processor, process the squash until smooth. Add the water incrementally until the soup is your desired thickness.

Add the salt, ginger, and gochujang. Process again until everything is well incorporated.

Pour the soup into a medium pot. Heat over medium heat until warmed through.

Garnish with sesame seeds. I chose black to contrast the orange of the soup since we are nearing Halloween! 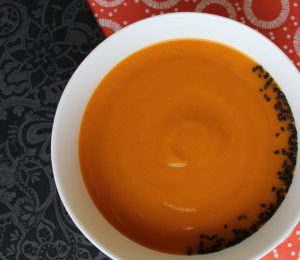