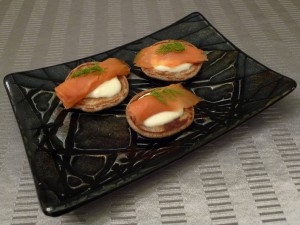 As the winter Olympics in Sochi, Russia are coming to a close, I wanted to try a Russian recipe to celebrate the occasion! I made blini with smoked salmon. 🙂

I used Ina Garten’s recipe as the base, but I made it a little healthier. I substituted the butter with Earth Balance, and used much less of it than the original recipe called for. Rather, I used a good non-stick pan, so the butter was unnecessary to keep the pancakes from sticking. I also used nonfat milk and reduced fat sour cream rather than the full fat versions.

Based on a recipe from Ina Garten

Combine both flours, baking powder, and salt in a bowl. In a separate bowl, whisk together the milk, egg, and 1 tablespoon of Earth Balance. Whisk the wet ingredients into the flour mixture. Heat 1 tablespoon of the Earth Balance in a medium non-stick sauté pan and drop the batter into the hot skillet, 1 tablespoon at a time. Cook over medium-low heat until bubbles form on the top side of the blini, about 2 minutes. Flip and cook for 1 more minute, or until brown. Repeat with the remaining batter. Set aside.

To serve, top the blini with a piece of smoked salmon. Add a dollop of sour cream and a sprig of dill.

Blini are often served with caviar on top rather than the smoked salmon. That could be something to try for the Oscars next week! 🙂