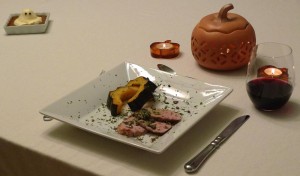 To celebrate, I made a festive autumn dinner tonight of pork tenderloin and squash with a pumpkin seed vinaigrette. I based the recipe on one I found from Bon Appétit. I substituted pork tenderloin for pork chops to make the dish a little leaner. (More room for chocolate Halloween candy later, I figure! 😉 ) I also added more pumpkin seeds than called for, since they are one of the stars of the dish. (And you may have read about my feelings about pumpkin in the last post. 🙂 It’s one of my favorite things!) 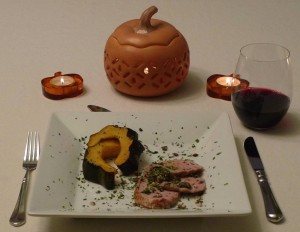 Based on a recipe from Bon Appétit

Preheat oven to 425°F. Spread out pumpkin seeds on a large rimmed baking sheet. Toast, tossing once, until just beginning to darken, about 4 minutes. Let cool. Coarsely chop; set aside.

When squash has been roasting for about 20 minutes, heat 1 tablespoon oil in a large heavy oven proof skillet over medium-high heat. Season pork with salt and pepper and sear until brown on all sides. Finish in the oven until the internal temperature registers 145 degrees. Let rest before slicing.

Divide squash and pork among plates; spoon vinaigrette over. Top with cilantro leaves and pumpkin seeds. 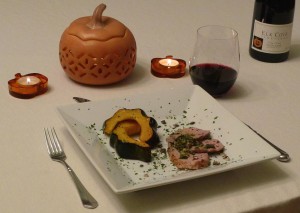 For dessert, I served pumpkin custard that I dressed up for the holiday. I piped a whipped cream ghost on top and added two mini chocolate chips for his eyes. PS. I wouldn’t recommend eating all the whipped cream, since I made him big and plump! But I love how he looks…He makes me smile. 🙂

I hope you have a safe and happy Halloween!