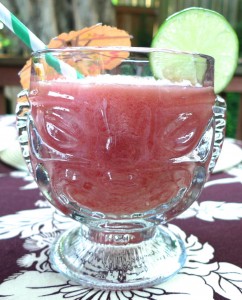 Tonight I took a culinary trip to three different Polynesian island nations on this beautiful summer evening! I tried recipes from Tuvalu, Samoa, and Tonga.

All of the recipes were from an inspiring food blog I admire called Global Table Adventure. I discovered the blog when I read the author’s memoir in which she shared her journey to make the website. She went on a culinary voyage in her own kitchen, cooking a meal from every country in the world. (That is 195 countries!) Then she wrote about the recipes and her experiences making them, as well as facts about the countries from which they came. She also added beautiful photos of the food as well as the countries she featured. I have already tried a few of the recipes ranging from a chicken dish from Panama (Arroz con Pollo) to a breakfast dish from Israel (Shakshouka). I have learned about dishes I have never heard of before, and even countries that I wasn’t aware existed. The blog has helped to open up my corner of the world to the greater world, filled my wanderlust, and ignited my passion for cooking on days when I’m not feeling very enthusiastic about making dinner. It really is a wonderful website, and I hope you’ll check it out. 🙂 I plan to cook many more adventures from this collection of recipes. 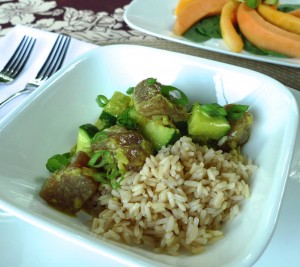 On tonight’s Polynesian adventure, the main course was called Tuvalu Tuna. Before perusing through the collection of recipes on Global Table Adventure, I wasn’t familiar with the island of Tuvalu. I learned that it is the smallest member of the Commonwealth of Nations. (Coincidentally, all of the nations featured in this meal are a part of the Commonwealth.) In fact, the Duke and Duchess of Cambridge (Will and Kate) visited Tuvalu a few years back, and they experienced a little of the local food and dance. (If you need a smile, check out the second half of this video. 🙂 )

I lightened the dish a little from the original recipe by reducing the amount of oil to only 1 tablespoon, and using light coconut milk. I also served it with brown rice instead of white.

I served the tuna dish with a simple salad from Samoa, which was the perfect accompaniment. It consisted of an unlikely combination of spinach, papaya, avocado, and cantaloupe, which worked together nicely. 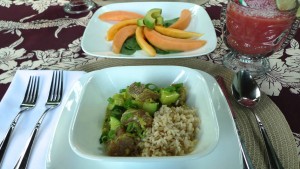 I paired our dinner with a classic drink from Tonga called ‘Otai. I can’t think of anything that is more summery than watermelon, coconut, and lime blended together! (This was my second batch of ‘Otai, since it is that good!) I used a light coconut milk beverage like this, rather than a can of coconut milk. Serve in a tiki glass for the full Polynesian effect! I think this would also be lovely with a little rum to kick it up a bit. 😉